You can build strong teams and reinforce training content with a TV-style game show. 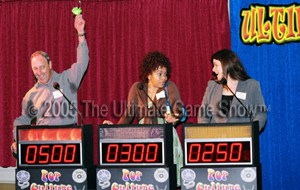 Ultimate Game Show® is the ultimate tool for training and team building sessions. As you know, a well-trained staff is a critical ingredient of any successful company. We will turn training sessions into a fun but effective way to learn. Game show productions from Ultimate Game Show® can be used to introduce your employees to new information or review previous training material, creating more proficient employees.

Studies prove that information retention is increased by more than 30% when game shows are involved in the learning process. Our game show’s will inspire your staff to stay attentive, retain what they’ve learned, and spark their spirit of competition. Training meetings will become something that employees actually look forward to, instead of falling asleep in. Say goodbye to boring training meetings!

How does it work? We help you to write custom trivia questions based on the key points of the training session. Then after the material has been taught, your employees will review the subject matter using a game show presented by Ultimate Game Show. During this fast-paced game, employees will answer your customized game show questions in either individual or team competitions. To maintain its effectiveness, we recommend a maximum game time of one and a half hours. However, in situations where training is scheduled for the full-day, short rounds can be played throughout the day. 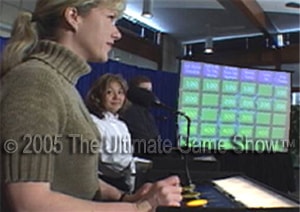 If you are looking for more traditional team-building programs, we developed several of those too. Mostly based on popular reality TV shows, we have a wide range of programs suitable for indoor or outdoor venues. All of our programs can be adapted to fill several hours or an entire day. Programs include: Ultimate Survivors, Ultimate Race, Monster Toybox, Ultimate Olympiad and many more. Our sister company Checkered Flag Interactive Racing also presents phenomenal team building programs. Each and every program is designed to encourage communication, teamwork, problem solving and time/resource management. Call our office for more details and for detailed descriptions of our team-building programs.

Visit our Event Videos page to see video clips of training and team-building sessions using both our contestant podiums and our audience response wireless keypads.

We think Ultimate Game Show is the most exciting and effective training tool available. But don’t take our word for it, read the article below. It was written by the president of a popular game software company. It features top corporate training professionals discussing the benefit of using game shows as a training tool.

Why Games Work©
A White Paper by Dan Yaman:

RESEARCHERS AND TRAINERS AGREE:
GAME SHOWS ARE A GREAT WAY TO REINFORCE LEARNING:

Playing games reinforces learning. This is a bold statement that some may dismiss as frivolous, but countless researchers and corporate trainers have the studies and experience to prove that games are one of the most powerful and successful ways to reinforce learning in adults.

“The idea of embedding academic learning in an entertaining format is centuries old, because it works,” says Eric Jensen in his book The Learning Brain. “Creative presentations afford the opportunity for students to reach social, artistic and emotional goals. But more important is the fact that in these contexts, learning becomes more enjoyable. Learners exercise choice and creativity, and there is minimum negative pressure.” 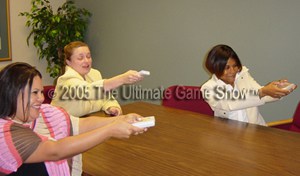 Just like children, adults enjoy playing games. They like to laugh, and they remember information that is tied to strong emotions. When a game is introduced into a serious classroom environment, participants relax, they get excited, they compete and, most importantly, they remember the event and the information tied to it.

“I can recall every question and answer in the game we won,” says Canada Airlines flight attendant Marnie Wilkinson about the gameshow she played recently in an annual review course. Instructors play Jeopardy® -style game shows in the classroom using course-specific questions.

“When the questions came up, I’d think ‘Oh I remember that,’ and BANG!, I’d be leaping across the table to get the points.” Her instructor, Sam Elfassy, decided the game was a much better way to end the course and reinforce the learning than a traditional written exam. “When new information is transferred in an appealing way, it stays with you,” he says. “If your emotions are engaged, you learn more.”

“The content of the course – Handling of Dangerous Goods – was pretty boring,” Wilkinson adds, “but putting it in a game format made it more fun.” She still chides colleagues in passing about beating them at the game.

Why does the information we learn from games stay with us? Because our emotions rule us. “Positive emotions allow the brain to make better perceptual maps,” says Jensen. “That means that when we are feeling positive, we are able to sort out our experiences better and recall them with more clarity.” 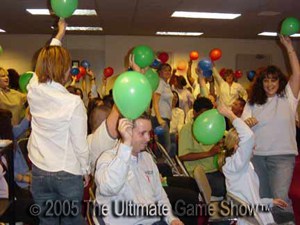 “Game shows engage students in just the right way,” says Elfassy, program developer of the Air Crew Training Department for Canadian Air Lines in Toronto. Elfassy uses a Jeopardy® -style game format in many of his courses to verify existing knowledge and reinforce newly learned knowledge. “It’s visual and audio, and it’s exciting and fun to play. Whereas exams are devoid of any engaging elements and increase the stress levels of the students.”

Melody Davidson, training manager for McDonald’s Corp. in Seattle agrees. “It’s far more effective to do experiential learning,” she says. Davidson uses game shows in nine training seminars to reinforce ‘nuts and bolts’ information like the temperature of the fry vats and garbage collection schedules. “Tests may prove this kind of information transfer, but game shows are more fun. It’s a ‘do and learn’ opportunity that lets students reach conclusions on their own.”

Davidson sets up the Jeopardy® -style game in a multi-tiered format so that winners compete against each other, and the best ones go to the national convention, where they have playoffs for “Top of the Arch” employee awards. Thanks to their experience with game shows, her Seattle division won the national competition. “They use the game to see what they know and to practice,” she says.

When training is intensive, games are an immediate way to lower the stress level of students — quite the opposite of looming exams. “Laughter can lower stress and boost alertness,” says Dr. Norman Cousins in the book Anatomy of an Illness. 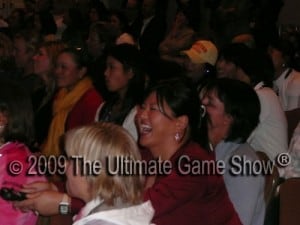 Carla Kaufman, Applications Knowledge Specialist for Lawson Software in St. Paul takes advantage of that. She uses game shows in the classroom to liven up students during a heavy two week applications training course. “By the middle of the second week, everyone is tired and a little overwhelmed,” she says. “They are stressing about exams and presentations that they have to do. When we start the game, everyone instantly relaxes and has fun. It’s a lot like going to happy hour.”

She uses game shows to review application knowledge in many of these workshops. “Playing the game shows the students what they did and didn’t learn,” she says. “It’s a much better way to reinforce the lessons of the past few days than to have me stand up and summarize the material.”

“A game show is a stress-free and fun way to learn that doesn’t diminish the importance of the subject matter,” adds Elfassy. “If they are always under stress, the information never reaches their thinking brains.” By using game shows instead of traditional quizzes, the stress is removed and learning is maximized, he says.

In most cases, trainers group students in large teams with buzzers, and questions and answers are projected on a large screen. “It’s very physical, which boosts learning,” according to Dr. Max Vercruyssen of the University of Southern California, who studies how the body’s posture affects knowledge-gathering. His research shows that, on average, standing increases the heart rate by ten beats per minute. That sends more blood to the brain, which activates the central nervous system to increase neural firing. “Psychologically,” he says, “standing up also creates more attention arousal, and the brain learns more.” 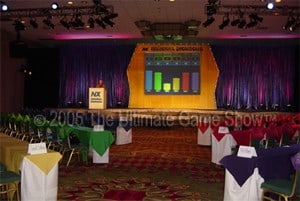 Dr. Jon Ebbert, Chief Medical Resident of the Rochester, MN based Mayo Clinic, witnessed the result of that increased brain activity when his residents compete in bi-monthly challenges, like “Name That Congenital Abnormality” a Jeopardy® -style game that reinforces medical knowledge. “It’s is a different way to learn,” says Ebbert. “It’s an informal learning environment. The residents let their guards down, which makes them more receptive to new ideas, and they are more willing to challenge themselves.”

Residents gather on three teams, each with a single buzzer, and compete to respond with “quick and dirty facts” that they need to know on the job, he says. “It’s a great way to train emergency medical personnel because it tests for information they need to know on a reflex level. The fast paced question and answer format forces residents to respond instantly with answers.”

Elfassy, at Air Canada, makes similar use of game shows to build team spirit and get heart rates pumping. He groups students into teams of 8-10 people, with one buzzer to share. “They have to work together as a team to win the game,” he says, and that’s part of what he’s teaching. “Our research shows that errors on flights are usually not technical, but are attributed to the crew’s inability to communicate effectively with each other. Games force them to work with each other, find different ways to communicate, and to divvy up responsibilities more effectively.”

“It’s a matter of pride to win the game when you are part of a team,” says McDonald’s Davidson. “Students don’t want to look bad, and they don’t want to let their teammates down. It gives them an incentive to work harder.” “And,” adds Kaufman, “it’s amazing how a little friendly competition gets even the quiet ones to speak right up.”

TEACHERS CAN SEE WHAT IS BEING MISSED:

Students aren’t the only ones who benefit from game shows in the classroom. Teachers use them to figure out what parts of their course content need adjusting and what topics need to be reviewed. “It helps me figure out what students are learning and what they are missing,” says Davidson. “I go back and tweak the course content if there are certain questions that are regularly missed.” 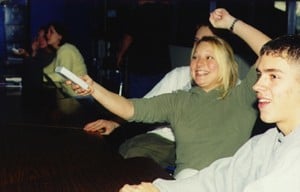 The combined evidence proves that game shows increase learning retention and improve the overall attitude about training among students who use the game in class. Attendance goes up, and people talk about the training long after it’s over.

“I have people who come to class excited to play our Jeopardy® -style game because they heard about it from someone else who’s taken the training,” says Davidson. “You’ll never get that kind of excitement about an end-of-class exam.”