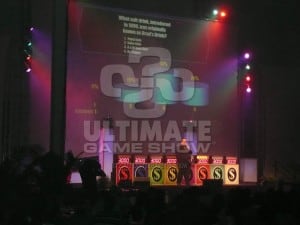 Ultimate Game Show® presents game show productions allowing groups to play virtually any game format they choose. We have developed nearly four-dozen game formats or we can help you create a custom game show just for your group.

We offer games inspired by popular TV game shows, and have developed a variety of original game formats. We have also created several team-building programs that are inspired by popular reality TV shows, which are the game shows of the new millennium. For the past two to three years, our biggest selling game formats have all incorporated a combination of realistic contestant podiums and audience response keypads giving you the benefit of 100% participation plus all the glitter, flash and fun of a Hollywood TV game show.

Each of game formats has characteristics that make it better or worse for specific types of events. Some of our games work best where employee training is the primary objective and you have a large volume of information you want covered. Other games are best for team-building events. Some games are perfect for awarding top performers within your group. Others involve everyone as opposed to a select few. If there is a specific game you are looking for, be sure to let us know when you contact us. Otherwise we will discuss the objectives and goals of your event and make a few game suggestions based on our expertise.

site. Many of our game formats also use proprietary game software developed exclusively for use by Ultimate Game Show®.

Because we offer such a large volume of game show formats, it is impossible for us to describe them all here. Plus we’ve grown tired of “training our competition” who often “flatter us with their imitations”.

You also won’t find actual TV game show names listed here, because to do so would be illegal. According to the attorneys of the TV production companies, even using phrases such as “a … style game” or “in the style of …” are violations of their copyrights and trademarks. Any company claiming to offer these games is most likely too small or too new to have been noticed by these TV production companies, but they are not “playing by the rules either way”. 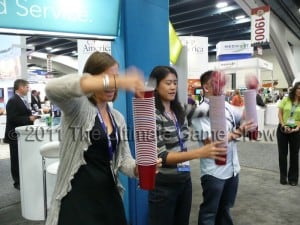 Below are the in-house names (we typically customize the game name for each client) of a few of the forty plus game show formats offered by Ultimate Game Show®:

And here are the in-house titles for the few non-game show team-building programs offered by Ultimate Game Show®:

Call today and one of our event consultants will discuss your event and suggest a few game show/team building options that best suit your needs.